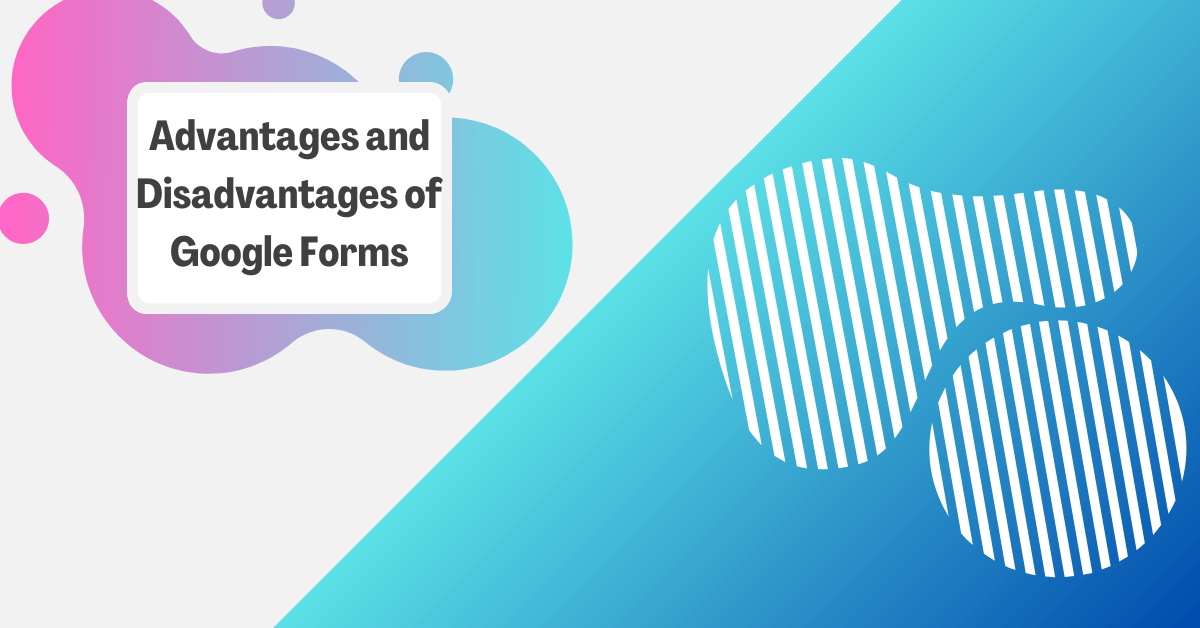 It is entirely possible that Google Forms is the most widely used form builder available today. Given the many benefits of Google Forms, the application’s immense popularity shouldn’t come as a surprise.

However, like any application, there are some notable disadvantages of Google Forms as well. There are certainly drawbacks to Google Forms that you should be aware of before deciding if the application is the best solution for your organization.

In this post, you can discover the most noteworthy advantages and disadvantages of Google Forms so that you can make an informed decision about moving forward with the platform.

Let’s start with the positives, shall we?

Possibly the greatest benefit of Google Forms is the convenience factor.

Google Forms is included in Google Workspace, which is basically a suite of free Google applications that includes Google Docs, Google Sheets, and more. To access Google Forms and these other applications you simply need a Google account.

Chances are that you already have a Google account, and if you don’t, it takes about 3 minutes to set one up.

No need to talk to a salesperson or onboarding specialist to get started.

Suffice to say that Google Forms is extremely accessible and convenient to use. Assuming that you already have a Google Forms account, you can start building a form in seconds.

One of Google Forms’ advantages is the application is incredibly easy to use.

Like most other Google applications, Google Forms is designed to be accessible to the masses. That being said, you don’t need any technical skills such as coding to make the most of Google Forms. If you are technically adept enough to create a Google account, chances are that you won’t have a problem making use of Google Forms.

With such a small learning curve, it can be easy for you and your entire team to get acclimated to Google Forms in no time at all.

Unlike other form builders, there isn’t a paid version of Google’s product. All the features that Google Forms has to offer are included in the free product.

For more information, refer to our post on Google Forms pricing.

The beauty of Google applications is that when you and other team members have Google accounts, you can easy share and collaborate on applications such as Google Forms.

By giving editor access to a Google Form to colleagues, your entire team can:

In turn, if you have a team that is interested in building surveys and viewing the results all from one platform, Google Forms is an excellent application for your team to utilize.

This feature also makes Google Forms an excellent choice for educators. Teachers can administer Google Forms quizzes to students and collect their responses for easy grading– simply change your Google Form to a quiz and it will auto-grade scores for you. The benefits of Google Forms in the classroom are numerous.

You can probably imagine that if you want to create numerous forms or surveys with a paid form builders solution, you may have a shell out a good amount of money to do so.

Google Forms has numerous features that you would expect to get with most paid form builders.

A few Google Forms features include:

File upload field: Allow respondents to upload documents or images through your Google Forms. This can be a powerful feature for collecting resumes, job applications, essays, tests, or other documents

These are all powerful features that you can, fortunately, access for free.

Creating a form is one thing, but distributing your form to respondents is another, and it’s just as important.

For one, you and your team members can access and collaborate on all your Google Forms through Google Drive.

Additionally, you can export data on respondent submissions via Google Sheets. In Google Sheets, you can get a run down of who submitted a form, as well as the responses of each respondent.

Not only that but you can also get notifications via your Gmail account whenever a teammate suggests an edit to a Google form or when a respondent submits a form.

One of the biggest Google Forms drawbacks is that the types of forms you can build out are relatively limited.

Google Forms is really good for surveys and questionnaires. It is designed for you to add a series of questions one after the other.

However, Google Forms isn’t the best tool for creating applications, lead generation forms, payment forms, or other types of forms. Google Forms simply doesn’t have the functionality to build out a variety of forms.

That being said, if you are interested in building out more than just surveys, consider moving forward with a paid form builder.

A wide variety of form templates: While Google Forms has a few templates to offer, the selection is not super extensive.

Payment gateway elements: A staple feature of paid form builders is the ability to accept online payments through forms. This is not something that Google Forms offers.

However, this is just scratching the surface. There are certainly other features that most paid form builders offer that Google Forms lacks.

With Google Forms, you have very limited control over the design of your forms.

You can change the color scheme of your forms. However, beyond that there isn’t much else you can do. You cant change the layout, or style of the forms at all.

This might not be such a bad thing if you are content with the look of Google Forms. After all, these forms have a nice minimalistic and modern feel. However, the design is very recognizable. Anyone who knows of Google Forms can recognize one of these forms from a mile away.

That being said, in order to make your form unique, stylistic, and perhaps a bit more professional-looking, consider moving forward with a paid form builder solution.

While Google Forms fits right in with all the other applications in the Google Workspace ecosystem such as Google Sheets and Gmail, it doesn’t have native integrations with third-party applications.

Now to be fair, Google Workspace add-ons allow you to purchase third-party applications that can be used in conjunction with Google Forms. However, these add-on are merely extensions that aid or enhance Google applications in one way or another.

To integrate with an email marketing platform or analytics tool, you would need to use a third-party tool like Zapier. Using a connector like Zapier may suffice, but most people prefer the security and simplicity of a direct integration.

For direct integrations to other marketing tools you might be using, a paid form builder might make sense.

One of Google Forms’ limitations is the reporting and analytics. While Google Forms gives you a nice breakdown of the responses to questions in your survey, the reporting is not nearly as comprehensive as that of other software like SurveyMonkey.

With many paid solutions you can see the breakdown of how long it takes respondents to answer questions, where in the world respondents are from, and much more. Often you can customize charts and graphs to visualize data collected, which is something you can’t do with Google Forms.

Not only that but many solutions allow you to export prebuilt presentations of all the data collected from a survey.

Taking an honest look at the advantages and disadvantages of Google Forms is critical when deciding if the application is best for you.

For those that aren’t particularly technically adept, or for those that simply want a simple, free form builder without all the bells and whistles offered by paid solutions, Google Forms is a great choice. However, for those that need more advanced features, integrations, design customizability, and more control in general over the form building process, a paid solution may be your best bet.

Nevertheless, free is free. Test out Google Forms at no cost at all to see if it will work for your purposes.